Taken from The Kilkenny People 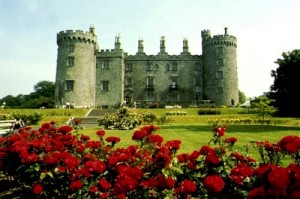 PROOF that there are spooks of some sort in Kilkenny Castle has come from an impeccable source (according to the Kilkenny People). An electronic counter in the Parade Tower has recorded visitors to the 13th century part of the fortress during the hours of darkness when the place is completely locked up. The state-of-the-art electronic gadget has recorded an extra 100 people a night and continues to baffle staff and add to the mystery of the out-of-this-world happenings in the castle.

Management at the OPW run visitor attraction were so perplexed by the phenomenon that they had the gizmo checked by the company that installed it and it was found to be working perfectly. However, it continues to register the extra numbers of visitors after dusk and there is no explanation for it.

There has been an attempt to keep the matter under wraps but a whistle blower working in the Castle is so afraid of what is going on that he/she contacted the Kilkenny People who verified it with someone in authority.

The clandestine visitors are based in the ground floor space of the Parade Tower which is a former dungeon where a number of people are thought to have died and where the trial against the infamous Dame Alice Kyteler on witch craft charges took place in February of 1324.

It is now the starting point for tours if the Castle where an audio-visual presentation is made and is an intricate part of the Kilkenny Castle experience. The counter is located at the entrance at hip level and takes an accurate measure of each person that goes in and out of the room. The company which is responsible for the machine told the OPW that they have never had a problem with this type of machine before.

There is only one door in and out and there are three narrow slit windows which are permanently closed. There are no bats resident there and there is no way that any human could get in or out without opening the door, setting off an alarm outside. It is understood that some of the staff are convinced that the place is haunted and will not speak publicly about it because of the Blue Lady, seen by a past sergeant in the park who has since retired. He was inundated with media requests after going public with what he saw.

This site uses Akismet to reduce spam. Learn how your comment data is processed.

By continuing to use the site, you agree to the use of cookies. more information